As a resident of Brooklyn for only a few years it is so fascinating to walk into different ethnic enclaves. When I walk through “Los Sures,” I see tattered Puerto Rican flags hanging from windows and hear thick Puerto Rican or Dominican accents fill the streets. When I enter the bodega I see a cat sitting on top of the loaves of bread taking his siesta. My body begins to move to the beat of bachata booming through the speakers. Just outside of the bodega, I hear two men shouting at one another about the lottery back in DR and I chuckle looking at the transnational lives of the people in Los Sures. I see abuelas looking out their windows, I notice one shouts at a young man to come up to eat. I see young kids running and jumping off their stoops while their parents chat on this Saturday afternoon. As I walk down Havemeyer St., South 1st, 2nd, and 3rd Avenues, I notice many Dominican beauty salons, but many small restaurants and bars filled with non-Hispanic families dining in. I can feel in the air and see with my eyes, the roots of this area being pulled and twisted.

The neighborhood of Williamsburg, Brooklyn has a rich history of immigrants. In the late 19th century it first homed many working class Irish and German families. By the turn of the turn of the twentieth century many Italians and European Jews had entered the space of Williamsburg. Then when World War II ended, Hasidic Jews made Williamsburg their home, Who came next? By the 1950s and 1960s there was an influx of Puerto Rican immigrants in the area (Curran, 1428). Many of these Puerto Ricans were living in South Williamsburg, but many Latinos of the area refer to it as, Los Sures meaning the Southside. Southside Latin@s live in close proximity to many Hasidic Jews up to S. 9th St.  Historically, Los Sures was one of the most poorest parts of the New York City. In Diego Echeverria’s documentary, “Los Sures” which takes place in 1984, he documents 5 Southside Latin@s lives. It was a time when the neighborhood was experiencing high unemployment rates, inadequate apartment buildings, few public resources, violence and drug use was extremely common. It is important to note in this documentary that residents of the neighborhood wanted to leave (Calderón-Douglass). I have yet to meet someone living in Williamsburg in 2015 that actually wants to really leave the neighborhood and not come back. This could be due to the fact that there is, “frequent conflict over the area’s now-limited supply of affordable housing as the neighbourhood’s population continues to grow,” (Curran, 1428). Since the late 80s artists have been moving in to find cheaper rent which catalyzed the growth of the population. Calderón-Douglass interviews Echeverria in 2014 asking him, “When did the neighborhood really start to change?” He replied, “The late 80s. I remember that by then there were several artists moving in. This is not something that happened from one moment to another.” This is extremely important to take into account, because this trend towards gentrification did not take place overnight.

According to the census, in 1990 the median income of Williamsburg ranged from $25,000-$55,000, with the Los Sures area having the lowest incomes (See pictures A-C). As the years continue to pass the median income is ever rising. Correspondingly the demographics of the Williamsburg area continues to change. “The 2000 census shows the neighbourhood to be 41 percent White, 43.6 percent Hispanic and 5.7 percent African American,” (Curran, 1428). By 2010 there has a been a -20-39.99% change of the Hispanic population just in the North and Southside of Williamsburg, (nyc.gov). There is a rapid increase of gentrification that is causing many Latino families in the neighborhood to become displaced. In Paul Moses’ article, “Gentrification. Who Wins, Who Loses?” he presents an extremely valid argument about how newcomers are approaching Los Sures. He writes, “Williamsburg’s impoverished Southside has been “discovered” by the same breed of “pioneers”—as many insist on putting it—who turned Williamsburg’s neighboring Northside into a hip artsy enclave…” (10). Even though the Southside consisted of many poor and working class families, it is not as if they are not human’s who have been living in these spaces. Southside, Williamsburg is far from vacant and newer residents need to keep this in mind. They should be aware that, “this gentrification comes at the price of displacing poorer people who have stuck it out through the high-crime years,” (Moses, 11). Even with crime and disheveled buildings, the lives of Los Sures residents may have seemed broken down, but there were still souls living in this neighborhood. These working class families should not be socially excluded because even with many economic changes there are many Puerto Ricans who are still living there, and other Hispanic groups such as Dominicans still surviving the streets of Los Sures. Although, many are being pushed out of the neighborhood, the history of Los Sures needs to be maintained.

I am very pleased to learn that UnionDocs Center for Documentary Art is producing an expansive documentary to pay homage to those who are being displaced or who have been in Los Sures for many years. They also have held screenings of Echeverria’s 1984 documentary throughout the neighborhood, to continue the legacy of Latin@s living in Los Sures. Equally important, I had the opportunity to converse with a Puerto Rican woman named Zulma* who moved to Los Sures in 1965. That’s 50 years! She explained to me how since 2007, a lot of her neighbors have moved to Florida, Massachusetts and Pennsylvania. She further discussed how they could not afford the rent because, “the Whites are constantly renovating and charging three times what they have used to pay.” She remembers when she first came here there were so many Boricuas and not that many Dominicans and now it is the reverse, plus the Whites. She began to chuckle as she related how even the bodegas are all owned by Dominicans or even Arabs now. Zulma’s facial expression began to sadden as she continued to share with me. She said, “These Americans are putting clubs everywhere and you know Havemeyer St.? I used to be able to buy everything I needed, shoes, clothes for children and now I have to travel even further.” It was interesting to see her view about the restaurants and how one young Latino man sitting on his stoop shared with me, “It’s getting better in this area because the White people are coming opening bars and clubs close to my home. They are making the neighborhood better and it’s okay because if you live here you’re entire life you get to see the change.” This saddened me that he was unaware or didn’t care that gentrification was displacing his own people. When you are young it is easy to travel and go out, but he should keep in mind the future of the area and not focus only only on the “good.” In comparison, I liked how Zulma compared Los Sures to the village, she said this place is like the neighborhood of the village, since the rent is too much in Manhattan. Which is true, many were first coming to Williamsburg for lower rents. Although, now it’s almost as if this rapid increase of non-working class people are invading Los Sures working class families.

Zulma did not keep her saddened face for long, she began to smile as she told me about a yearly get together many old residents of Los Sures have for a reunion. She even invited me to it, telling me it is in July and that it is the third year they have organized it. She said she is getting older now, but she likes to see all the Latin@ families throwing parties in the street with the kids running around. She misses how everyone used to watch out for one another, but the Domincan families keep to themselves often, so it’s not the same. This was interesting since non-Latin@s would look at us the same. Zulma told me how she cooks for the reunion, even though she stays upstairs for most of it. This is because she is on a third floor apartment without an elevator, she tried to get a lower floor apartment, but her rent would increase by thousands. Zulma continues to tell me she has many children and grandchildren so they often come and visit her, some live with her, so she is never really alone. She said most of the neighbors know me, except the newer ones they aren’t as friendly. Additionally, Zulma explained to me how Williamsburg may have had a lot of gang violence, but everyone knew each other and she feels that the streets today are just as dangerous. She says this because she feels even though gangs aren’t causing problems like back then, no one looks out for one another like they used to. She blames the White Americans, since they are only building the apartments for people with money.

Furthermore, she even mentioned the high school, El Puente Academy for Justice and Peace. She thought there should be more high schools like that, to keep Latin@s here. Getting their education here, going to college but returning to help us. What stood out the most to me was when she told me how Los Sures isn’t united, this country isn’t, it separates us. “All of my children were raised here, and the majority of them left, that’s what this country does to us…Even though I don’t pay as much rent as others in this building but I suffer because I see the division and I know eventually my kids won’t have my house to always come to…”  Zulma has lived in Los Sures so long and she cannot deny the change, her account made me realize how fortunate she is to not have to be displaced. Of course, there are others like the young man who told me he was happy that it was changing, but it is vital to “recognize the danger that apartments will be priced beyond their reach; that the local companies where they work will be forced out by higher rents,” (Moses, 10). Just as Zulma mentioned, many of the stores that she once used to shop at are gone due to restaurants and bars and mainly because, “their space has become attractive to developers who convert lofts into residences,” (Curran, 1428). More and more residences are being built, but not to accommodate the warriors who have been able to survive Los Sures for many years.

More people need to challenge that the poor are not being made visible enough in Los Sures. I look forward to seeing UnionDocs, “Living Los Sures 1984 and Today,” because that is an important factor in keeping the history alive, they call it a “people’s history.” The “renewal” of Los Sures should expand to both poor and working class families. Critical dialogue of this ethnic enclave is needed, because the Hispanic percentage is continuing to drop in this part of Brooklyn. In all, I look forward to attending a block party or two in Los Sures. I hope the Latino roots of Los Sures remain and never become detached.

*Name has been changed

“The maps below show how much Williamsburg has changed since 1990. Darker color corresponds with higher income. 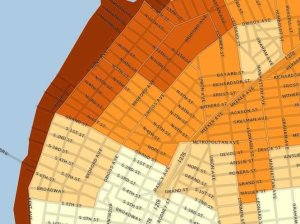 And here’s the key:

iThere are no comments

Begin typing your search above and press return to search. Press Esc to cancel.